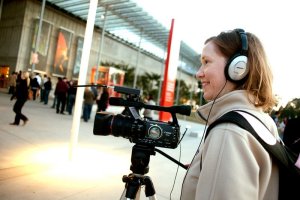 Clay Shirky (who got a nice nod in Frank Rich’s Sunday Times piece) has noted that the next evolution of journalism will emerge one way or another, whether it’s the creation of a known monster like Google, or “some 19-year-old kid few of us have heard of.”

Steve Cochrane’s not 19, but he may be one of those “kids” who figures it out.  And even if he doesn’t, he’s one of the braves one out there trying something new, instead of rolling to work every day obsessing over whether we’ll be fired that day, and bitching about the fate of local news.  So on principle, Cochrane and his partner, Kieran Farr, deserve a lot of credit.  But what, exactly, are they doing? And is it showing signs, you know, of working?

So to start this week with something to ponder beyond Frank Rich’s “American Press on Suicide Watch,” we offer our first Monday Morning Dispatch from the Frontlines.  And thanks, Steve, for being the kid in class brave enough to share his project first.

Hi, I’m Steve Cochrane, and I co-founded VidSF with Kieran Farr. First, I’d like to thank Mark for letting me have the run of his wonderful blog here. It’s extremely encouraging to hear such interest in our project.

So, why did we start VidSF? We noticed that our friends weren’t watching local news anymore. Kieran and I are both in our mid-twenties, and if anyone our age is watching news, it’s probably from The Daily Show and not from a local offering.

We had also worked together on a television station that Kieran founded while at college, Indiana University Student Television . It’s still going strong and we learned a great deal from the project, so we decided to try again with local news for the web. We’d like to say we predicted the collapse of local TV news, but we just got lucky.

What’s the difference between news for TV and news for the web? As you all know, back before you had your Internet Blogs, and your Tweeter and MeSpace, making local news required a horrifically expensive studio and a time slot on cable. Because of this scarcity, a local TV news station only had to compete with maybe two or three other stations for viewer attention. At least, that’s what I’ve pieced together from multiple viewings of the historical document Anchorman: The Legend of Ron Burgundy.

Today, with compact cameras and dirt-cheap webhosts, the days of limited options are over. The level of competition has gone way, way up, and viewers are likely to flee a site if they have to watch even one sub-par video. When viewers are held in contempt, like the classic “bait the viewer with the most interesting story and withhold it until the very end of the broadcast,” they don’t have to stand for it, because they can get their news elsewhere. So it’s important that we really respect our viewers, value their time, and edit relentlessly. That’s why we have a rule that our videos can only be two to four minutes in length. There aren’t many stories that need more time than that.

Cochrane: "Being the Little Guy Has Never Held Us Back"

What’s working for us? We’re really happy that we decided to go the all-video route. There are many, many local news start-ups popping up, but they’re predominantly text-only. While a video site is harder to set up and more expensive to maintain than a text site, it definitely has its advantages. Video advertising generally performs far better than traditional banner ads, which viewers have trained themselves to ignore.

As for content, event coverage has been working great for us. There are lots of fun and quirky events in San Francisco to cover, like the Bring Your Own Big Wheel race and the Valentine’s Day pillow fight . So instead of the inane reporter stand-up , we interview the people involved and let them tell us why it’s important. We’re not going to be winning Pulitzers any time soon, but these events are fun to watch and quick to produce.

It’s also surprisingly easy to gain access to events, even if no one’s ever heard of us before. We’ll just send a polite email and almost invariably we’ll get a nice reply with a press pass and free drinks. Being the little guy has never held us back.

What’s not working for us? This one’s easy: user-generated content. When we originally started VidSF, we had the crazy idea that “anyone can be a video journalist!” We soon found that when you get a bunch of random people from Craigslist without any journalism or video production experience and have them tape what they want with no oversight, the end product is not very compelling.

So we’re changing our approach from user-generated content to more of an edited publication. Having to make that transition has slowed us down a bit, but that’s how start-ups like these go. In order to survive you can’t just set a plan in stone, you have to bob and weave.

This may be disappointing to some, but we’ve also noticed that our more laboriously produced and researched “serious news” videos are generally less popular than our lighter, more entertaining ones.

What about the whole “money” thing? This is probably the thing that readers most want to hear about, and unfortunately we don’t have much of an answer yet. We did recently build a custom advertising system that serves pre-roll ads — brief video ads that play before a feature — similar to the ads on Hulu . Currently we’re thinking through how we want to make sales, and we haven’t approached any local businesses yet, but we’re close. Will it work? We don’t know yet, but we hope to make lots of money, and we’ll see how that pans out.

2 responses to “Dispatch from the Frontlines: VidSF Co-Creator Steve Cochrane”